The Centre has expertise in the following areas: 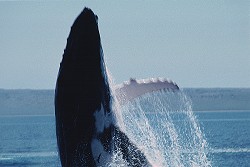 Our research focuses on the distribution, abundance, and dynamics of marine mammals occurring along the coasts of Australia. We conduct marine mammal focused research (including impact assessments) and investigate the nature of changes in aspects such as ecology, behaviour, and vocalization from three broad groups of marine mammals: pinnipeds (seals and sea lions), dolphins, and whales, in order to understand the causes for these changes.

CMST solves ecological and environmental problems through a technical and multidisciplinary based approach using a team of scientists and engineers with expertise across a range of disciplines (biology, physics, statistics, engineering, and computer science).  The collaborative nature of CMST has made possible the acquisition of long term behavioural and ecological data sets collected at key sites through a multitude of techniques and platforms. As a result, many of our projects are aimed at solving significant and broad scoping problems, having significant implications internationally.

Our capabilities fall into the following categories:

Habitat mapping and krill/fish abundance using active acoustics – benthic habitat mapping, and identifying fish and krill aggregations using echo sounders such as single beam, side-scan, and multibeam have been a focus of much work for many years.

Blue whales are one of several species that fall under international protection (IUCN). The current status of the populations is unclear, since these animals are inherently difficult to study because of their low numbers, and because they tend to occur off-shore. Various projects are underway to obtain a greater understanding of blue whale ecology, behaviour, and current status. Some of these include:

Vocal behaviour of blue whales on a feeding ground off the coast of Western Australia – Blue whale call type and its relationship to krill distribution and abundance, and myctophid fish chorus behaviour in the Perth Canyon, Western Australia.

Humpback whales (Megaptera novaeangliae) migrate annually from Antarctica along the Australian coast. They have had a long history of exploitation from the whaling industry. Although the population has been increasing steadily since the ban on whaling, humpback whales continue to face threats, many of which are introduced by human activity. Several projects are underway with the aim of understanding the migration of humpback whales, their status, and the level of anthropogenic impacts. Some of these projects include:

Patterns in distribution, abundance, and behaviour of humpback whales migrating past North West Cape, Western Australia – A long term project using aerial and boat based platforms for assessing migratory behaviour across the shelf edge. This project is led by the Centre for Whale Research (WA), Inc.

The use of passive acoustics as a censusing tool for humpback whales along the Western Australian continental shelf – Abundance and distribution assessment based on passive acoustic censusing.

Bottlenose dolphins (Tursiops spp.) are common, occurring in all oceans across the world. Because they regularly occur within such close proximity to human activity, they have a high likelihood of experiencing impacts from pollution, including chemical and physical (such as noise) pollution introduced within the marine environment at major ports and industry sites. Various projects are underway with the aim of answering some of the key questions regarding the ecology of bottlenose dolphins in Western Australia, and potential impacts of high human activity. These include:

The Australian sea lion (Neophoca cinerea) is an endemic species, restricted to southern and southwestern Australia. The species suffered population decline from commercial harvesting during the 19th and early 20th century. There are current and ongoing pressures which may be responsible for its inability to recover. To mitigate impacts, a comprehensive understanding of behaviour and population dynamics is needed. A number of projects are underway with the aim of answering key questions regarding the ecology of Australian sea lions in Western Australia, and potential impacts of high human activity. These include:

Assessment of human disturbance to Australian sea lions within the Perth Metropolitan Area – An assessment of the effectiveness of a sanctuary zone on Carnac Island. This project is supported by the WA Department of Environment and Conservation.

Diet assessment of Australian sea lions on the west coast of Australia – Assessment and standardisation of near-infrared spectroscopy for use in diet assessment through a study on captive sea lions. This project is run in association with and supported by the WA Dept. of Fisheries.